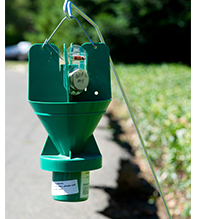 The primary responsibilities of the Pest Detection/Emergency Projects Branch (PD/EP) are the early detection and prompt eradication of serious agricultural pests from California. This is accomplished through the operation of a statewide detection trapping program, special detection surveys, and the maintenance of emergency projects response teams.

The primary objectives of the statewide pest detection system are to find insect pests before they infest one square mile and plant diseases before they exceed one-half of a square mile.

The primary objective of the emergency project component is to quickly and efficiently eradicate incipient infestations of serious agricultural pests, thereby preventing permanent establishment and subsequent spread in California. Other activities include: