The California Department of Food and Agriculture (CDFA) established the Beet Curly Top Virus Control Program (BCTVCP) in 1943 to manage the economic impact of beet curly top virus (BCTV) throughout the State in accordance with California Agricultural Code, section 6031-6043. The BCTVCP is funded through the assessment of impacted crops, with the rate of assessment being determined based on region and level of impact. Program activities are based on the recommendation of the Beet Curly Top Virus Control Board (Board).

Since its initiation, the BCTVCP has successfully reduced the severity of BCTV outbreaks in California through constant monitoring and control of beet leafhopper (BLH) populations, the sole vector of BCTV. This management strategy utilizes both aerial and ground control methods. Control operations primarily take place in the San Joaquin Valley; however, the BCTVCP monitors both BLH populations and BCTV outbreaks throughout California.

The Beet Curly Top Virus Control Board (Board) consists of 9 members representing the four districts serviced by the Program (see map below). The Board was established under California Agricultural Code: Sections 6039-6042 to advise the Secretary on the impact of BCTV on the industry, and the assessment rate on impacted commodities. 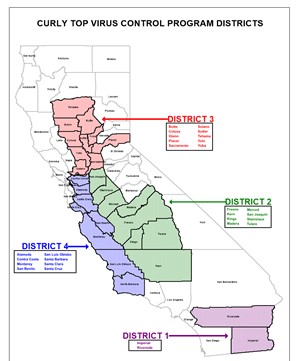 Please use this link to access a PDF of the BCTVCP Assessment Rates:
https://www.cdfa.ca.gov/plant/IPC/curlytopvirus/pdfs/AssessmentRates/CTV-AssessmentRates.pdf)

Since the early 1900s, curly top disease has been a known cause of serious crop damage across the Western United States. Curly top disease is caused by BCTV, which belongs to the family Geminiviridae, and genus Curtovirus. BCTV infects approximately 300 species of crop and weed plant species, and importantly, causes significant damage to sugar beets, tomatoes, spinach, melons, hemp, peppers, and other economically critical crops in Arizona, California, Colorado, Idaho, New Mexico, and Utah.

The only known vector of BCTV is the beet leafhopper, Circulifer tenellus. The beet leafhopper (BLH) is a small insect that can accumulate BCTV while feeding on annual and perennial weeds. Once the BLH have accumulated the virus, they can then transmit BCTV as they feed on agricultural commodities in search of new host plants, potentially causing severe damage and crop losses.

In California, BLH overwinter in the foothills of the Coastal Range, west of the Central Valley. There, BLH feed and lay eggs on perennial weeds (e.g. filaree [Erodium spp.], peppergrass, various mustard species, and buckhorn plantain [Plantago lanceolata]) that germinate following seasonal rain. These host weeds can be infected with BCTV, which BLH ingest and accumulate as they feed.

As the rain stops and the foothills dry, viruliferous BLH migrate to the Central Valley floor in search of annual weeds (e.g. Russian thistle [Salsola tragus L.], Chenopodium species including lambsquarter and goosefoot, and London rocket [Sisymbrium irio]) to complete their life cycle. As BLH migrate to the valley floor in search of preferred annual weeds, they feed on susceptible agricultural crop plants, infecting them with BCTV and potentially causing damage.

The BLH’s migration to the valley floor tends to occur between March and April. This coincides with the start of the growing season, when BCTV-susceptible crops are at their most vulnerable stages of early growth. However, while most incidence of BCTV infection occur at the start of the season, infection can occur throughout the growing season. This is because BLH can persist on the valley floor for three generations, with the potential to continue spreading the virus as they move from host weed to crop. In late fall, BLH return to the foothills to overwinter.

Determining the status of BLH populations throughout the year is dependent on survey with insect nets.

Beet Leafhopper Control
Control efforts are timed to coincide with the reproductive biology of the BLH by disrupting the continuity of the BLH’s life cycle and lowering the BLH population below economic thresholds prior to its spring migration into susceptible crops or fall migration to overwintering sites.  Control efforts generally take place at two distinct points in the life cycle: spring and fall.

Sample Collection
Throughout the year samples are collected and sent to the CDFA Plant Diagnostic Lab by both BCTVCP field personnel and pest control advisors from around the state.
Types of samples collected include: