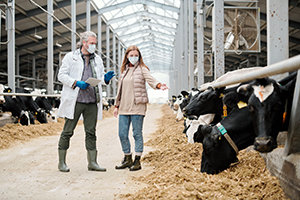 The Animal Health Branch's (AHB) highest priority is to protect California animal agriculture, human health, and the nation's food supply by preventing, detecting, responding to, and eradicating foreign animal diseases from our farms and our food chain. The AHB is the State's organized, professional veterinary medical unit that implements programs that protect California livestock industries, consumers, and the economy from catastrophic animal diseases or other livestock health and agricultural problems. Many diseases monitored by the AHB have zoonotic potential meaning they can be transmitted from animals to humans. Finding, isolating, and eliminating diseases that threaten animal health, public health, and the availability of affordable, wholesome food can only be achieved through dedicated, highly trained personnel maintaining programs to rapidly detect and respond to animal disease introductions.

A Foreign Animal Disease is an animal disease or pest, either terrestrial or aquatic, not known to exist in the United States or its territories. When these diseases can significantly affect human health or animal production, and when there is a significant economic cost for disease control or eradication, they are considered a threat to the United States. As such, any animal exhibiting clinical signs consistent with a known FAD must be thoroughly investigated by a specially trained Foreign Animal Disease Diagnostician (FADD).

There are many pathways (e.g., direct contact) that an FAD can be introduced into our environment. State and federal governments have programs in place to decrease the risk. However, no prevention plan is failsafe. The lines of defense must include everyone involved, such as state and federal veterinarians, local veterinarians, industry, livestock owners, zoologic park personnel, and companion animal owners.

If an FAD enters our country, it will spread rapidly throughout our animal population and may cause a public health issue. Only through prompt recognition and quick containment can we prevent an FAD from spreading out of control.

The nation is at risk of FAD entry through many pathways:

Risk factors for the rapid spread of disease after introduction into a susceptible population include:

Livestock disposal planning is essential for emergency preparedness and presents an opportunity to build long-term avenues that support California agriculture needs. As it stands, California livestock producers have limited options for livestock disposal. One option is rendering and the other is the limited use of landfills. In the event of a livestock disease outbreak, rendering may become overwhelmed and unable to accept livestock. A number of Landfills do not accept livestock mortalities for various reasons and are impacted by new regulatory requirements outlined in Senate Bill 1383, which sets mandates for achieving specified targets for reducing organic waste in landfills. For these reasons, the Animal Health Branch (AHB) partners with the Meat, Poultry, and Egg Safety Branch (MPES) to work diligently with regulatory partners to highlight the need and evaluate solutions for alternative emergency livestock disposal.

AHB works closely with the MPES to protect public health and the environment, as it relates to livestock carcass disposal. Through this partnership, personal continue to develop a Rendering Disruption Emergency Animal Carcass Disposal Advisory. The Animal Mortality Emergency advisory is designed to assist animal agriculture producers in understanding disposal options during emergencies when usual regulatory carcass management methods are unavailable. Each AHB District Office has a Regional Carcass Disposal Plan that addresses a number of emergency scenarios and animal mortality disposal options. Coordination with county officials in the affected areas is a key factor in determining available emergency carcass disposal options.

As a matter of further exploring animal disposal avenues and technologies, the AHB and MPES collaborated with the University of Maine to host a livestock carcass composting field day on February 15, 2022, followed by the three-day University of Maine Extension Animal Mortality Compost School SME Course which occurred on March 22-25, 2022 at the UC Davis Veterinary Medicine Teaching and Research Center in Tulare, CA. Over ninety (90) participants attended the compost field day from various agencies such as CalRecycle, Local Enforcement Agency, Ag Commissioners, Water Board, industry as well as CDFA, USDA. Thirty (30) participants representing CDFA, USDA, Washington Dept. of Agriculture and Ecology, Arizona Dept. of Agriculture, and producers participated in the Compost SME Course in March.

CDFA staff members who successfully completed the Animal Mortality Compost School SME Course are eligible to participate in a second phase. The second phase in achieving the SME certification entails on-the-Job training and job shadowing an existing compost SME. Five (5) of the ten (10) CDFA staff who participated in the March course have completed this on-the-job training in other States during the 2022 Highly Pathogenic Avian Influenza outbreak. This training and job shadowing is tremendously beneficial as it allows CDFA animal health response staff to better understand and view the composting process first-hand, under emergency conditions, and provides familiarity with differences in regulatory environments within those affected States. The knowledge captured during this two-phased approach will enable CDFA staff to effectively oversee emergency carcass compost operations in California.

AHB EPRS works closely with MPES, participating in the CDFA animal mortality compost working group focused on developing a regulatory framework for allowing emergency animal mortality composting as an alternative during rendering disruptions or when traditional disposal options cannot be considered due to emergency conditions. Following great progress on evaluating and preparing for emergency animal mortality disposal alternatives, AHB and MPES will continue working with regulatory partners to bring attention to the need for emergency alternative livestock disposal avenues. Over the next several months, AHB EPRS personnel have committed to several informational webinars on carcass disposal and composting for the CDFA Cattle Health Advisory Board, as well as Cal Recycle LEA Roundtable Meetings, as a matter of preparedness and alignment for disease outbreaks as well as expedience during times of crisis.

As the Department's resource for Incident Command System-trained personnel, the Animal Health Branch was tasked with setting up and running the CDFA's Department Operations Center (DOC) for the COVID-19 response beginning in March 2020 and continuing through May 2020. During the DOC activation, 13 AHB staff were activated, for the duration of the response, to fulfill roles as DOC Director, Planning Section Chief, Logistics Section Chief, Situation Unit, animal industry liaisons, CARES liaison, and animal testing coordinators. Food supply interruptions and agriculture essential worker issues were coordinated with the animal agriculture industry, tracked, and reported to the CDFA Executive Office. Additionally, many program subject matter experts were involved in developing guidance documents for the industry to assist with the continuity of business efforts in the face of public health guidance that was evolving during the early months of the response. AHB staff have continued to coordinate nationally and with the California Department of Public Health on animal testing for SARS-CoV2.