Diagnosis of TB in Live Animals

1. The first test to detect possible carriers of bovine tuberculosis is the Caudal Fold Tuberculin (CFT) test, in which a small amount of purified protein derivative (PPD) tuberculin is injected into the fold of skin at the base of the tail. The CFT is read 72 +/- 6 hours later. If negative, no further action is required. If positive, the animal is classified as a responder and requires further testing. A false positive rate of 1-2% is expected during a whole herd test. 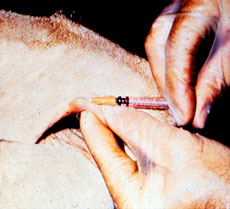 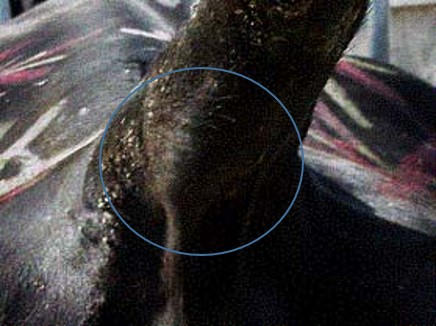 2. Responders to the screening test require secondary testing: A Comparative Cervical Tuberculin (CCT) test must be performed within 10 days, or after 60 days, of the CFT by a regulatory veterinarian. The CCT consists of two injections given in the skin of the neck - one of bovine tuberculin extract and one of avian tuberculin extract. The response is read 72 hours later and plotted on a special graph (scattergram), allowing animals to be classified as negative, suspect or reactor. If negative, no further action is required. If reactor, the animal is humanely euthanized for necropsy and diagnostic testing of samples. If suspect, the animal is either sent for necropsy and sample testing, or remains in the herd under quarantine for a second CCT after 60 days have elapsed. If the suspect animal is still positive (suspect or reactor) on the second CCT, it will go for humane euthanasia to be necropsied and tested at a diagnostic laboratory. 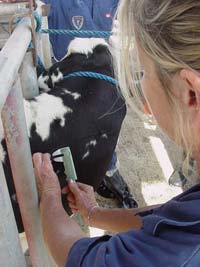 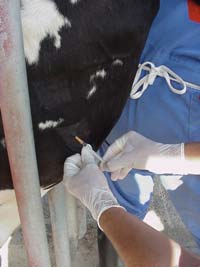 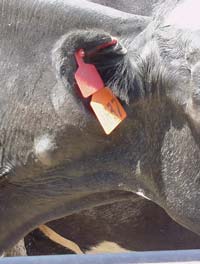 An alternative to the CCT is a whole-blood based test, the gamma interferon test, which must be performed within three (3) to 30 days following CFT injection. CDFA, USDA and approved private veterinarians may draw blood from the CFT responder. This test quantifies the amount of cytokine interferon gamma produced by live lymphocytes (white blood cells) in response to stimulation by PPD tuberculin. Results are used to classify animals as negative, suspect or reactor (similar to the CCT test). Suspect animals can be re-bled within 30 days of the CFT injection. Invalid results due to poor lymphocyte function can occur, and a CCT may be necessary, as retests often prove repeatedly invalid.

3. Animal necropsy and laboratory testing of samples (including microbiology, molecular biology, and histopathology) are needed to definitively diagnose bovine TB. Samples include lymph nodes of the head, thorax, and abdomen, as well as any other abnormalities found. If necropsy and subsequent sample testing indicate the animal is not infected with TB, the herd must still be evaluated and may be tested a minimum of 60 days after removal of the reactor. If necropsy and sample testing indicate the animal is infected with bovine TB, the herd is quarantined and, if it contains other infected animals, declared affected. The owner/producer, along with government agencies involved, can apply for whole herd depopulation OR develop a herd test and removal plan.

A short video demonstrating bovine tuberculosis testing is available here TB Training Video, and can be ordered, free of charge, by accredited veterinarians licensed in California. Please call the Animal Health Branch at 916-900-5002 to place your order.

For accredited veterinarians, a bovine tuberculosis testing demonstration video. (The arrow key to begins the video) (13:51) 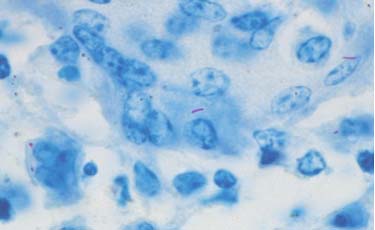 Histological examinations of the granulomas are performed to identify the accumulation of macrophages and bacteria. Acidfast staining allows visualization of the bacteria. The tissue is ground into small pieces, treated to destroy nonmycobacteria, concentrated by centrifugation, and applied to a microscopic slide to be examined. The bacteria appear as short red or pink rods. As other bacteria can also absorb acid–fast stain, further diagnostics are necessary.

Polymerase chain reaction (PCR) test can be performed on those samples containing acid fast bacteria. PCR is used to detect the presence of specific M. bovis genetic material. PCR is the amplification of portions of the M. bovis DNA. The benefit of PCR is the ability to detect low levels of bacteria. PCR results are available in approximately 48 hours.

Culturing M. bovis is the definitive diagnosis of TB. Samples are cultured under specific conditions, which favor M. bovis growth. M. bovis is a slow growing organism and takes from 8-16 weeks to grow. Once Mycobaterium is isolated, the sample undergoes biochemical testing to ensure the species is M. bovis. 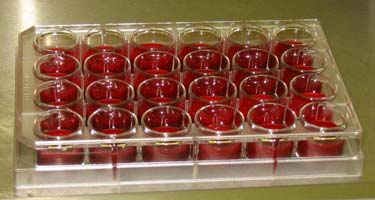 In recent years, DNA fingerprinting techniques by restriction fragment length polymorphism (RFLP) has been developed. RFLP is a technique which produces a pattern of bands similar to a bar code. This pattern represents the fingerprint of that particular M. bovis isolate. The similarity of fingerprints indicates a relationship between two isolates. Fingerprinting is of great importance to determine the source of TB infections in cattle herds.

Recent research has led to the development of a blood test (gamma interferon), a test that measures cell–mediated immunity in cattle. This test has recently been approved as a confirmatory test for cattle that may be used instead of the CCT. The test is expensive ($8–10/head) and the blood is difficult to handle. There is no reliable antibody–antigen test that measures humoral immunity for the diagnosis of TB because cattle have few circulating antibodies.