Tuberculosis (TB) is a serious bacterial disease caused by Mycobacterium, a group of bacteria that usually affects the respiratory system. Animals infected with TB may not show signs for years, but animals that appear healthy may still be capable of transmitting infection to other animals.

Tuberculosis is classified into three types:

Human TB, or M. tuberculosis, is rarely transmitted to animals, although it is often the type of TB that affects elephants. Avian TB is typically restricted to birds, but occasionally pigs and other animals can become affected. Bovine TB is a chronic disease that has affected animal health throughout recorded history and is capable of infecting most mammals.

More information on the disease and testing of live animals can be found in the Resources links.

The U.S. Department of Agriculture (USDA) maintains a monitoring system that classifies states based on the presence of bovine TB within a state's cattle population. States, or zones within states, are classified in five categories: Accredited Free, Modified Accredited Advanced, Modified Accredited, Accreditation Preparatory and Non-Accredited. The categories are based on the number of cases of bovine TB that have been identified through surveillance programs. A state’s status can be downgraded if new cases of bovine TB are identified.

Please see our California Bovine TB Update for information on the latest bovine TB investigations and a summary table of the affected herds.

Contact your local CDFA Animal Health Branch District Office if you have any questions.

The Significance of Bovine TB

The Department is concerned about the effects of TB on the industry for several reasons. First, there is a zoonotic risk for individuals consuming raw milk and raw milk products from TB-infected animals. Second, infection with bovine TB compromises the health and reduces production in affected cattle; the presence of bovine TB can also result in trade restrictions. Additionally, there is concern about the establishment of infection in a wide host range including free-ranging wild species. While the risk of humans contracting bovine TB is extremely low, positive cases in the state’s cattle herd can negatively affect consumer confidence in milk and beef products. It is important for consumers and public health officials to understand that the TB bacteria is killed when meat is cooked and milk is pasteurized, steps that provide a final barrier to protect public health.

CDFA's objectives for the bovine tuberculosis program are to:

In the early 1900's, the TB eradication program began in the U.S. due to the impact of bovine TB on human and animal health. Initially, the TB program consisted of area testing, in which approximately 15% of a state's cattle population was tested each year; all herds in the state were tested every six years. This method was the primary tool used in the eradication effort until national prevalence levels of TB were greatly reduced. In 1994, California discontinued this approach because the prevalence of TB had reached such low levels that area testing was no longer an efficient method to detect the disease.

The primary method of tuberculosis surveillance shifted to slaughterhouse inspection - every bovine processed in California is examined for signs of disease. Any animals with lesions suspicious for TB are not used for human consumption, and undergo further diagnostic testing. If an infected animal is detected, an investigation is initiated by the California Department of Food and Agriculture to determine the origin location of the animal.

Bovine tuberculosis is a zoonotic disease, meaning humans can be infected by exposure to infected animals or animal products. As the prevalence of bovine TB has decreased and pasteurization has become routine, fewer human infections are traced to drinking milk. However, humans can still become infected by drinking raw milk or eating unpasteurized cheese from TB-infected animals.

Bovine tuberculosis does not threaten the quality and safety of milk and meat products produced in California. Almost all milk sold in California is pasteurized, which destroys organisms that can be harmful to humans, including tuberculosis organisms. The state’s raw milk dairies are regularly tested for tuberculosis. All cattle processed for meat are inspected for bovine TB and rejected for consumption if they show signs of the disease.

A few cases of airborne infection continue to occur among meat industry and slaughterhouse workers in regions where infection remains prevalent, including Mexico. Additionally, humans have the potential to transmit bovine tuberculosis back to cattle; however, unlike M. tuberculosis, it is rare that M. bovis is spread human to human.

Bovine TB is most commonly spread between cattle through respiration. Invisible droplets containing TB bacteria may be exhaled or coughed out by infected animals and then inhaled by another animal. Ingestion is another route of transmission, as affected cattle shed M. bovis in milk, and may be important for infection in calves. Contaminated feed, water or the environment are less likely modes of transmission. White-tail deer are the only wildlife reservoir identified in the U.S.

Signs of the Disease

In most affected cattle, lesions (granulomas, or "tubercles") are primarily found in the lymph nodes associated with the respiratory system. Lesions can also be found in the thoracic cavity, head, and mesenteric lymph nodes, as well as in the organs (lung, spleen, liver).

Formation of the TB Tubercle 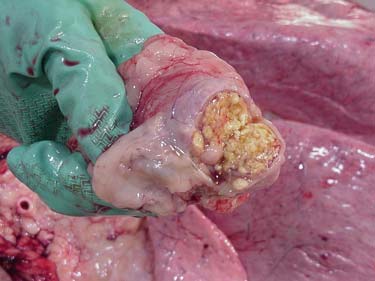 A tubercle is a granuloma consisting of inflammatory cells. When an animal’s immune system identifies M. bovis, it releases inflammatory cells, chiefly macrophages. However, M. bovis is resistant to the destructive action of the macrophage. The animal’s immune system still recognizes the TB invader and releases additional macrophages. These macrophages encapsulate the area and localized bacteria to wall it off from other tissue, and a tubercle forms. Tubercles are usually located in the respiratory lymph nodes and the lungs. The preliminary diagnosis of tuberculosis in slaughter establishments is the identification of these tubercles. Any granulomas suspected of being M. bovis granulomas are sent to an approved laboratory for further evaluation.