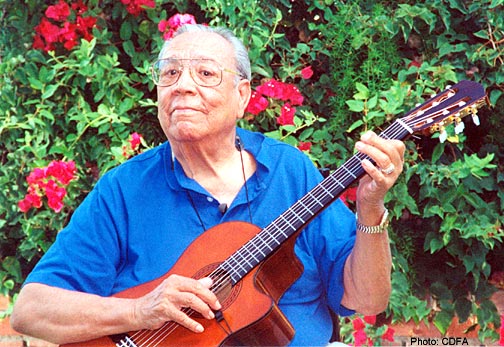 The passing of Lalo Guerrero in March 2005 struck a solemn chord among his many fans. Tributes to "The Father of Chicano Music" were featured in many national and international publications, including the New York Times and the Los Angeles Times.

Lalo was special to those of us at the California Department of Food and Agriculture. He served as a "celebrity spokesman" for the department for more than ten years, writing and performing songs, making radio and television appearances and performing on behalf of CDFA at many public events. He helped whenever and however he could because he believed our messages held special significance for California residents.

His song "The Foreign Fly," about the Mediterranean fruit fly, became one of the most frequently played songs on Spanish language radio stations throughout the state. The message was "don't pack a pest," thereby protecting the crops from hitchhiking exotic pests like the Medfly, which, in turn, helped to protect jobs in agriculture.

Lalo delivered the pest exclusion message as he serenaded travelers at international air terminals in California, often in the wee small hours of the morning as they waited to board flights for the holidays. He appeared at news conferences at border crossings across California, Arizona and Texas and serenaded people as they crossed.

He appeared on many live radio and television broadcasts, often "just dropping by" to deliver the CDFA message. He opened the door for meetings with large newspaper editorial boards who were often more interested in meeting and interviewing an entertainment legend than promoting the message, but wrote about the message anyway out of respect. Lalo and his son Mark re-edited some of his famous "Las Ardellitas" recordings to create an entertaining program delivering the "don't pack a pest" message to Spanish-speaking grade school children at Christmas assemblies.

During his long and varied association with CDFA, Lalo also wrote songs for the 5-a-Day nutrition program including "Reggie Eat Your Veggies" and the red imported fire ant public information campaign. He performed one-man shows, including the CDFA songs, during large Hispanic festivals across California. He even sang a song promoting CDFA programs on loud speakers while serving as the grand marshall of the Cinco De Mayo parade in San Jose.

In 2000, The California Legislature welcomed Lalo to the state Capitol to present him with a Cinco De Mayo resolution for his work and dedication to CDFA. He thanked them by singing a touching tribute to young Hispanic men and women who had lost their lives fighting for this country.

Lalo accomplished all of this, in addition to his many tours across the United States and internationally, while in his late 70s and 80s. We will miss his humor, his vitality and his commitment to his family, his friends, his fans and his culture.